Any hipster worth their weight in existential dread knows that no outfit is complete without the right shoes. Everything else can be put together perfectly, but if your shoes aren’t right, neither are you.

The go-to hipster styles right now distill the past through a modern lens; think the LA skate scene of the ‘80s, the mod movement in 1960s London, or classic rock and roll. Think Vans skate shoes, Chelsea boots, and Converse All-Stars. Here’s a closer look at the coolest hipster styles:

Skate or Die in the Vans Authentic When it comes to iconic footwear, the Vans Authentic have become some of the most recognizable shoes in the world.

This shoe features a durable canvas upper that’s double-stitched in critical-wear areas. This design ensures that your shoes last and that they continue to keep looking their best. The Authentic from Vans also features painted metal eyelets, a rubber outsole, and a waffle gum sole.

While the most iconic Authentic is the black and white variety, there’s a seemingly endless array of different colors, designs, and prints available. For the creatives among us, you can also custom design your own Vans Authentics. On the Vans site, you can choose from a variety of colors and materials, and even upload your own images.

The best part of this classic shoe is its versatility. The Authentic is just as at home at the skate park as it is for date night, or casual Friday at the office. Plus, everyone looks great in a pair of Authentics. Converse began developing basketball shoes in the early 20th century. By 1917, they had developed a sneaker worthy of the court: the Chuck Taylor. In its early days, this classic shoe underwent some much-needed upgrades, thanks to the advice of Chuck Taylor.

Chuck Taylor was a semi-pro basketball player during the 1920s. He is best known for his promotion of and association with the Converse brand. As a token of their appreciation to Chuck, Converse added the iconic star logo patch with Chuck’s signature, and the shoe has remained mostly unchanged since then.

While it’s rare to see a pair of Chucks on the court these days, they’ve been adopted by rock n’ roll, punk, hip-hop, and virtually every other youth movement since the 1960s.

Today, the All-Star is available in high-top and low-top models, and there is a myriad of different colors and materials to choose from. You can even design your own Chucks on Converse’s website.

Part of being a hipster is all about keeping it simple, so the iconic low top Chucks in black or white are a go-to for anyone looking to capture some of the effortless cool these shoes are associated with.

One of the coolest aspects of this iconic shoe is how easy they are to wear. You can dress them up with a suit or a dress, wear them with jeans and a t-shirt, or style them however you’d like. No matter how you wear your Chucks, you’ll always be able to channel an effortless hipster style.

Few styles complement the hipster fashion like the Chelsea boot, and no designer is as iconic as Mark McNairy.

Chelsea boots were first made popular in England in the 1960s, where they were closely associated with the mod scene. For the Gen Z’ers in the crowd, the mods were the first hipsters, and their stylish garb laid the groundwork for all the hipster shoes and apparel that followed.

New Republic offers a full line of Mark’s signature designs, including some of the most iconic Chelsea boots you’ll find. Whether paired with jeans and a t-shirt, a button-up and slacks, or even a suit, Chelsea boots are at home with virtually every look. Adding a quality pair of Cestfini Chelsea boots to your wardrobe is one of the easiest ways to inject some style into your closet. 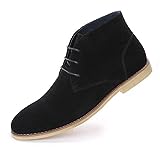 Tennis Anyone? The Adidas Stan Smith Another classic athletic shoe, the Adidas Stan Smith, is one of the most iconic sneakers of all time. Prized for its simplicity and sleek looks, the Stan Smith is one of the world’s most popular sneakers. You’re sure to see these on the feet of the most unaffected hipsters from coast to coast.

The first version of this iconic shoe was developed well over fifty years ago, but it rose to prominence in the 70s after it received the endorsement of its namesake, Stan Smith. While different models have been produced over the years, the original white and green pair is the most iconic. To date, Adidas has sold over 40 million pairs of this classic shoe.

While it’s a casual sneaker at heart, few pairs look as good dressed up with a suit as the Stan Smith. These days, collaborations with tastemakers like Pharrell and designers like Raf Simmons have propelled this icon even further, and everyone should have a pair of Stans at the ready in their closet. 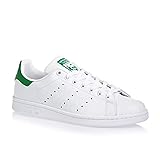 The Shoe That Put Air Jordan on the Map The 1 that started it all for Michael Jordan, this shoe has topped sneaker best-of lists for thirty years running. Once banned by the NBA, classic Jordan 1 colorways have been selling out with regularity in every sneaker shop in the world.

When he turned pro, Mike had dreams of signing with Converse, but after a comprehensive pitch from Nike execs, he couldn’t walk away without signing a sneaker deal with Nike. Soon after, the Air Jordan 1 was released, and then quickly banned by the NBA for its aggressive colors, which weren’t in line with league regulations.

Thus began the legend of the Air Jordan, the world’s most iconic basketball shoe. Today, reissues of the classics Mike wore on the court sell out in seconds and are worth over $500 on the resale market.

Collaborations with brands like Levi’s, Off-White by Virgil Abloh, Fragment Design, Don C, Dover Street Market, the Air Jordan 1 has further solidified itself as one of the most iconic sneakers ever made.

While classic colorways like the Bred, Black Toe, and Chicago are the most coveted, you can usually pick up a fly pair of Ones from any of the sneaker stores in your area. 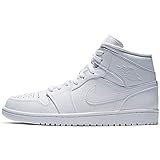 Give Back With Toms Classic Slip-On

A little over ten years ago, Toms sent the fashion world on fire with their practical and straightforward slip-on. The company was created in 2006 with a mission of providing a pair of shoes to a child in need for each retail pair sold.

Today, Toms makes a wider variety of footwear with the same mission in mind. Their classic slip-on style is still the most popular, and it pairs incredibly well with all types of hipster clothing and accessories.

This style is modeled after a traditional Argentinian shoe, the Alpargata. The Alpargata features a canvas upper, rubber sole, and suede footbed. Elastic at either side of the shoe makes it easy to slip them on and off your foot. As part of Toms’ One for One promise, for every pair sold, a pair is donated to a child in need.

Anyone who is looking for a pair of comfortable yet hip shoes should consider picking up a pair of Toms. Plus, you’ll be doing good in the process! 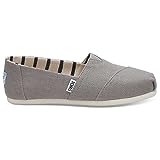 These classic runners from Nike are comfortable and versatile, making them perfect for everyday wear.

These classic kicks have been part of Nike’s catalog since the 90s. Likewise, there are a variety of different colors and materials available to match whatever style you have. Many of the most popular Internationalist sneakers feature a mesh and suede upper with a rubber midsole and lug outsole.

Classic, two-color versions like these are a great look for virtually all occasions. They  these shoes pair best with your favorite pair of jeans. No wardrobe is complete without a reliable pair of ass-kicking boots. Luckily, the Captain boot uses premium materials and construction to channel an effortless cool.

These boots are made in both the United States and Mexico, and they’re handcrafted from start to finish, and the average production time per pair is ten days. They feature vegetable-tanned leather, Goodyear welt construction for added water resistance, a durable rubber sole, and a cushioned cork footbed.

A pair of Captain boots from Thursday Boot Co will set you back more than a few happy hour tabs, but consider it an investment in your own coolness – your future self will thank you.

From brunch ready Chelsea boots to Nike runners to Chuck Taylors, nothing completes an outfit like a cool pair of kicks. Whether you’re looking for something to wear to the office, date night, or anywhere in between, these hip shoes are sure to kick your style up a notch.