There are all sorts of ways to ride a bike. You can careen through the outdoors, tour from town to town, cruise through the city, or otherwise go wherever you need to go.

The type of bike you choose depends on the conditions you plan to ride in. When riding through a suburb, city, or urban area, you’ll need to choose a bike built for that environment. For the best in city bike riding, we’ve got to hand it to the hipster.

Hipsters sometimes have a reputation for choosing style over substance, but they know what they’re doing regarding bike riding. Here’s a closer look at everything you need to know about hipster bikes, including the function and fashion.

Let’s put the rubber to the road and learn more about what hipster bike riding is and what makes it fun and unique. If you’ve seen a hipster cruising through an urban area on a bike, the chances are good that bike was the fixed gear type. Fixed gear bikes are, far and away, the type of bicycle most commonly associated with hipsters.

However, they were originally used by bike messengers. Have you ever seen the movie Premium Rush, where Joseph Gordon-Levitt is a bike messenger who gets caught up in adventure and espionage? That’s a fixed gear bike.

They have a few key benefits:

Naturally, these features are useful for bike messengers as they roll through the busy, dirty streets of urban areas. Low maintenance means the road debris doesn’t slow them down, and responsive controls help prevent them from getting creamed by a taxi.

Also called fixies, these bikes are notable for what they don’t have. Fixed gear bikes lack:

The chain remains fixed without freewheel action in the hub. If you’re not familiar with bike terminology, here’s a translation: Every part of the bike is connected and moves in sync.

You can’t coast on a fixed gear bike. If you try, the pedals will move your feet forward, potentially knocking you for a loop.

Instead of braking, you control both acceleration and deceleration with the pedals. Push the pedals to increase the speed, and press against them to slow down.

If you’re interested in fixed gear bikes, some examples include this fixed gear commuter bike from Retrospec or this single-speed bike from Raleigh. If you need to navigate through the city from Point A to Point B, a bike is one of the best options. But what if Point B is a subway, bus, or train?

Here’s the Ferro from Zizzo.

It’s a 29-pound bike which folds down to a square 27” high by 31” long. Another popular option is this hinge folding bike from Schwinn. It has a steel frame with 20-inch alloy wheels. When folded, it measures 30” high by 32” long.

As you can see, the shape of these bikes is unique. They typically have high handlebars and a tall seat. While they’re fine for covering short distances in the city, they’re not built for long-distance travel or off-road adventures.

Pay special attention to the size of the wheel. While larger wheels provide the most comfortable ride, the extra size does limit your storage options.

If your bike is too big when folded, buses and trains might bar you from bringing it on board, which defeats the purpose of having a folding bike in the first place.

However, the right folding bike makes city travel a breeze as you effortlessly switch from bike to train to the bus as needed. Hipsters call it “multimodal,” but you’ll call it easy. Also called beach cruisers or town bikes, cruiser bikes are made for easy riding around urban areas. They have a few distinguishing features:

Cruiser bikes are easy and fun to ride. They’re stable with comfortable seating.

Even if you’re not an experienced bike rider, you’ll likely feel right at home on a cruiser bike.

On the downside, they’re not designed for racing or off-roading. Instead, you’ll want to keep your cruiser on relatively flat, paved roads.

Firmstrong’s beach cruiser bicycle is a popular choice for men. It has 26” tires with an oversized seat and wide, ergonomic handlebars. 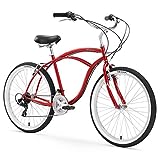 This women’s three-speed cruiser bicycle from sixthreezero is another excellent option. It has a classic, curvy frame with a dual-spring saddle and 26” whitewall tires.

Cruiser bikes were the most popular bike in the U.S. from the 1930s through the 1960s. As with many products from the past, which currently enjoy a modern-day boost in popularity, we can thank hipsters for helping cruiser bikes find a new customer base. While hipsters love old-fashioned gear, they’re also not afraid to embrace new trends. The newest fad in biking is the electric bike.

They’re already a major hit in Europe and are quickly growing in popularity throughout the states (with hipsters leading the way).

Also called e-bikes, they have an electric motor that helps you pedal. However, the bike doesn’t pedal for you.

According to BYU researchers, electric bikes provide a substantial workout – even though riding them doesn’t feel as strenuous as riding a traditional bike.

Note the motor doesn’t increase the speed of the bike. You won’t zoom down the street like Ghost Rider. Instead, the electric motor reduces the effort required so you can travel longer distances without tiring.

This men’s electric cruiser bike from sixthreezero is a stylish example of an e-bike. It has a 250-watt rear motor with pedal-assist and full-electric. Depending on the mode, the battery lasts between 18 and 60 miles.

On the downside, e-bikes are heavier than normal bikes. They also typically cost more than the traditional type. But they’re a great choice if you bike a significant distance each day. Not all hipsters ride in the city 100% of the time. They enjoy hitting the trails, too.

If you mainly ride a bike in an urban area but want the ability to go off-roading on occasion, get a hybrid bike.

They have a similar overall structure to a road bike, but with the flat handlebars and wide tires associated with a mountain bike.

If your budget allows it, choose a hybrid with disc brakes instead of rim brakes. Also, if you like to ride at night, you’ll want to equip your bike with a front light.

The Schwinn Network 3.0 is a hybrid bike with an alloy frame and 21-speed EZ-Fire shifters. It’s well-suited for a variety of urban and rural riding.

While hybrid bikes aren’t designed for heavy-duty mountain biking, they’re a great choice if you live in an urban area but like to take a detour now and again through your city’s parks. 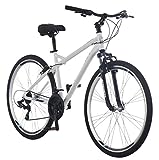 Let’s go back to bike messengers for a bit. Now, they don’t all fight bad guys like Joseph Gordon-Levitt, but they’re still cool.

They race through downtown, flying past all the stiffs in their suits. They’re fit, fast, and fashionable.

Young tastemakers and fashionistas noticed the coolness of the bike messengers they saw on the streets. Soon, styles inspired by bike messengers were showing up on young people regardless of what they did for a living.

The most popular accessory taken from the world of bike messengers is the messenger bag. Durable, comfortable, and portable, you can strap the bag around your torso or hold it in your hand.

Today, you’ll find messenger bags used by everyone, from students to office workers and more. However, before they hit the mainstream, they were discovered by hipsters.

This bike messenger bag from Timbuk2 is a classic example. It has a simple, understated style.

If you’re looking for something a bit hipper, check out this retro canvas bag from Leaper. It has a soft canvas exterior with leather straps and copper-colored buckles.

Although it might be a bit too bulky to wear while riding a bike, it’s cool-looking and convenient for pedestrians.

From Portland to Manhattan and every city in-between, you’ll likely find plenty of hipsters navigating their environment on a bike instead of a car.

Plus, bike riding is healthy. Even if you ride a short distance to and from work, every ride helps boost your heart health, lung function, and more.

If you’re looking for a cool, stylish, and well-made bike, hipsters have lots of knowledge to offer. Check out the bikes on our list to find the perfect ride!