Collecting vintage posters is a great way to not only remember places you have been to but explore them from years ago too! The best part about travel posters, especially vintage ones, is that they allow you to go and see parts of the world from an era you never had a chance to visit. Even better, vintage posters help you realize changing social trends and are a great window into the past to reflect upon the present.

But before you go out to every antique store or start searching the web, you will soon realize that actual vintage posters are considered artwork and are beyond the reach of the casual collector and aficionado. After all, you are looking for a memento or conversation starter and not an investment!

Back in the days when air travel was more exotic and less routine, enticing people to go on a contraption that did not have modern safety standards and luxuries was a bit of a challenge. Luckily for you, many airlines felt the same way and decided to promote their final destinations and mode of travel as a fun, luxurious affair to far-flung locales around the world. Some of these companies included:

These posters are a great way to look at an era on air travel that was not so focused on legroom, snacks, and fire sales on less-traveled routes. Rather, these posters highlight the best of a bygone era where air travel was an unknown and mystery to most people.

Because of the rarity of people flying on airplanes, airline companies needed to make their destinations seem as exotic as getting there to entice people not just to fly but spend time at their unique destinations too.

Railroads used to be called the iron horse and for a good reason. Back in the days before automobiles, railroads represented red, the fastest, most cost-efficient way to get around since before horses were the main transportation mode.

In order to capitalize on horse travel, railroad companies wanted to incorporate the positive traits of the horse while also emphasizing the luxury of their trains. To best represent the freedom, ruggedness, and speed of their trains, they used various techniques to illustrate this to their audiences.

Railroad companies used this method as a common way to advertise their routes and why their trains were better than their competition. Because the industry was so crowded, it produced ample opportunity to get in on the vintage poster action! Though there are literally thousands of railroad companies that made posters, some of these were the most famous:

Railroad posters often depicted exotic and hard to reach locales such as mountains or areas far removed from major cities. This idea was two-fold. First, it showed their trains could go anywhere, and it also showed that choosing a train might be better than other modes of transportation that could not reach that area.

Additionally, railroad company posters did their best to mitigate the fact that spending often days on the rail could get very boring. Highlighting what you could do during that not-so-short train ride was a big deal, and these posters do a great job of showing how they kept you entertained!

The last reason you need to collect railroad posters is that they represent the best of the golden age of rail and remind you what railroads used to be. Though still widely popular in Europe, the US has let their rail system lag behind, and these posters can be a great conversation starter or bring nostalgia for times of yesteryear.

Not every poster available out there is available for purchase. Only the most popular or well-known prints will ever be reproduced. There are several options available for those looking for a particular print not usually found in stores or online.

Places that publish posters online are usually archives, libraries, or repositories. However, some businesses will publish these, as well. These include:

Of these three, the Library of Congress has the most extensive, publicly accessible collection. Better yet, their prints are even available for download!

Getting posters from here is a great idea for multiple reasons:

Many people do not like winter and do their best to avoid it, but there really is so much to see and do in this beautiful season! From visiting snow-capped cities to winter sports and everything in between, winter posters did their best to highlight all the things there were to do outside of the house.

Some of these activities shown by posters include:

The best part about these posters is that they show that even in days before central heating and the latest all-weather clothing, all you needed to have fun in winter was simply a puffy jacket and your imagination!

Just like winter, summer-themed posters were a great way to show what was available to do outside the house. These posters showcased exciting locations and fun activities to do beyond just going to the beach. Some of the common tropes found with summer posters include:

As you can see from these examples, beaches, and road trips were the most common themes that companies tried to push onto their customers. What is also interesting to point out is that though these were the two most common themes, different artists did tend to spotlight different elements.

Whether it was a particular umbrella on the beach or a type of vehicle used for driving, it would be an interesting sort of game to see if you could collect all the different variations used by a particular artist. Additionally, mopeds seem to be the preferred mode of travel in summer-themed posters, so finding ones that emphasize other vehicles would be interesting too! 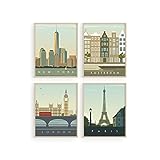 Collecting by destination is a great way to see how a certain place has been portrayed over the years with different or out of date resorts or exhibits being displayed. Do not worry about trying to find original prints since the promotions for certain cities would revolve around different themes to give people a good sense of what they could expect.

By dividing your collection into this area, you can also better represent a city or country’s appeal over time since companies were keen to sell different aspects to avoid seeming identical to other offerings. Also, people have different tastes and giving a holistic view of what all an area encompasses was the best way to appeal to many and better capture all that a town or country has to offer. 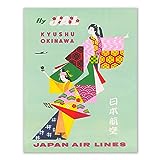 Whimsical posters are something of a special category since they are made up of various tropes or themes surrounding national cultures. While some of these might seem insensitive today, the vast majority are still timely and represent fun and interesting way to view other cultures and how their sense of humor has evolved.

These posters were not intended to be degrading or cast a place in a negative light. On the contrary, they were supposed to elicit humor and a curious response from people looking at them to make them want to travel to those locations.

While some of the humor might not be as appropriate today, these posters still represent a valuable look into the past that can be a great talking point and show people trends in what was considered acceptable in society.

There are a great many ways to organize your poster collection. Whether by season, location, or locale, finding high-quality prints is easier now than ever before. While finding reproduction prints is a good start to building your collection, you should also not discount making your own posters for ones that are hard to find or are in foreign languages.

Creating your own is also more cost-effective, and you can build up an impressive collection quickly, but you need to make sure you follow all applicable laws when reproducing these images.

No matter which method you choose to remember the past, the most important thing to keep in mind is that just like the travelers of the past, you do not always need the perfect roadmap to get to where you are going!